Bullet For My Valentine enter studio for code name BFMV5 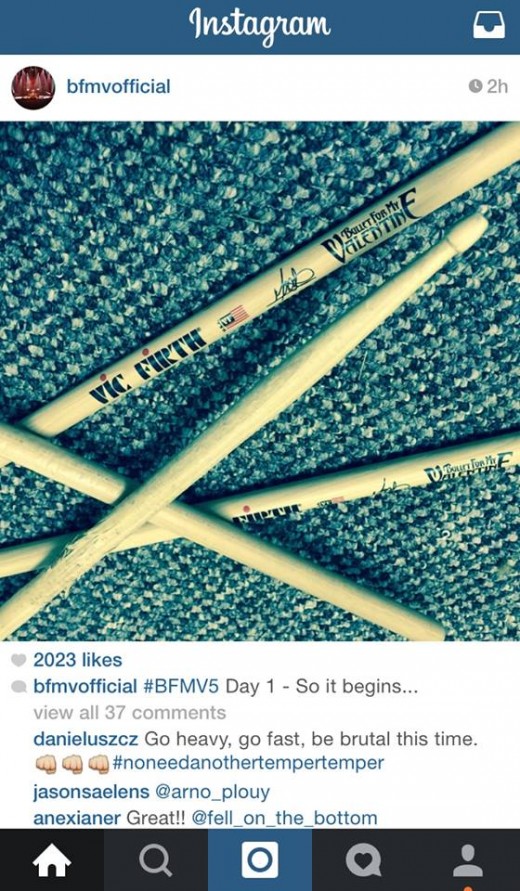 From the Welsh rockers Bullet For My Valentine‘s own mouths:

We’ve been working hard on this record for over a year now, writing and demoing a ton of material in that time. As we sit here on the 1st of February 2015, we have the most songs we’ve EVER had written for an album before recording session, and now begins the difficult process of choosing the best of the best of them to make the cut for ‪#‎BFMV5‬

Going into this process, we couldn’t be more happy or excited to have our man Colin Richardson back behind the desk again. We worked with Colin on our first two records, ‘The Poison’ and ‘Scream Aim Fire’ (as well as the self titled’ BFMV’ EP) and as we listened back to those records during the writing process for this new album, we realised what a special vibe and excitement these records have, and why they’re held in such high respect by our fanbase.

This album, though, is not about going backwards. We’re excited to work with Colin again, but equally excited to be working with Carl Bown for the first time, who we consider the most exciting new British record producer out there right now, and the guy to help take this Bullet record to exciting new places.

Today we start the recording process for #BFMV5. We’ll be taking and uploading one exclusive new photo from the studio per day on our instagram account over at http://instagram.com/bfmvofficial/ so if you’re not signed up yet, you’re missing out, as we’ve just posted our first pic over there now.

More News On Bullet for My Valentine:

More On: Metalcore, Recording, Bullet for My Valentine, Jive Records
share on: