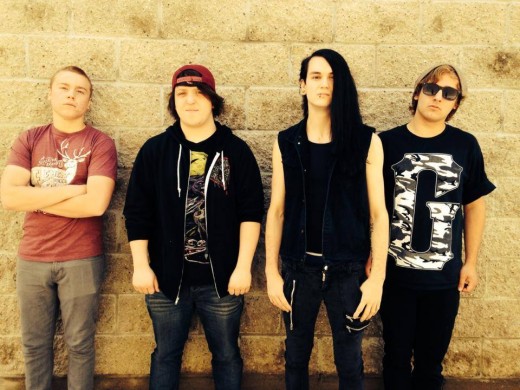 Minnesota deathcore newcomers Discord Curse are making quick work of getting recognition by getting on the stage with the likes of bands like Suffokate, getting coverage by the likes of New Noise Magazine and having Johnny McBee of The Browning appear on one of the songs on their forthcoming debut.

The debut, which will hit on September 29, is entitled Burnt Offerings. Check out my review of the four-track deathcore slab here.

The album starts off with the brutal “#Bandwhore”, which features Johnny McBee of The Browning. Despite the awesome instrumentation and the guest vocals of McBee, the track suffers from the some flaws in production. Some of the vocals seems buried under the instrumentation. I think the hope was to create multiple layers of vocals, with some as a subtext or a background to others, but instead the effect is like listening to the vocals of the metal of the person in the next apartment over from you.

The second song is “Foresaken”, which begins to exemplify the band’s lyrical chops. The song starts off catching my attention with the line, “We will all burn the same!”

The song keeps its momentum with neck breaking kick drums and builds to, “And now you are finding your final direction // It’s six feet below!” Before “Foresaken” fades into the next song, the listener is left with the lyrics “We need to stand for something // yet still we die for nothing!”

The third track “The Rage of Tybalt”, for my money, wraps up presentations of Discord Curse at their most brutal and most melodic all in one track. While pummeling the listener with the best death growls, deathcore screams, post-hardcore melodic singing and blistering guitars and drums, the song also incorporates some pretty intense lyrics, “Even a fool could have told you that your existence is leading to nowhere.”

“The Rage of Tybalt” calmly fades and then we’re blasted into “Anathematize the Bleeding”.

“Anathematize the Bleeding” could probably be any deathcore song by most deathcore band. Though it is highly untraditional and definitely would catch flack for being much less than ‘trve’ and ‘brOOtal’, “The Rage of Tybalt” is where Discord Curse stands out and where I would love to see them develop their sound.

I look forward to hearing Discord Curse develop their production skills and coming into their own sound.

For more Discord Curse, check them out on Facebook and stay tuned into Metal Riot and don’t forget to pick up Burnt Offerings on September 29!