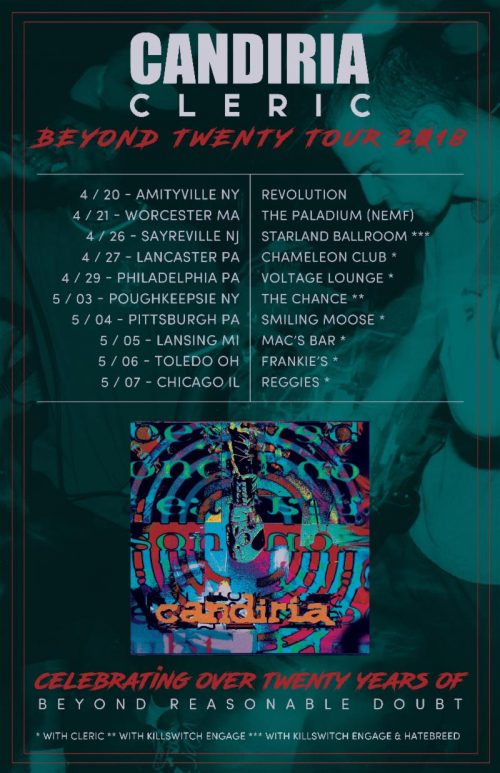 Metal alchemists Candiria will be hitting the road for a spate of headline dates commemorating 20-plus years of their critically acclaimed sophomore album, Beyond Reasonable Doubt.

The tour kicks off on April 20 in Long Island and will feature support from Clericon most dates. The trek will take the band through the Northeast and the Midwest. It also includes an appearance at the annual New England Metal and Hardcore Fest. The band will also play two shows supporting Killswitch Engage. Additional dates will be added and all confirmed dates are below.

The band has crafted a special set list for the tour to celebrate the definitive Beyond Reasonable Doubt album. At the shows, Candiria will also be selling a special “Collector’s Edition” of Beyond Reasonable Doubt. This version is packed with memorabilia and imagery from the period in which the band was writing, recording, and supporting the album. It also boasts newly revised artwork, audio taken from the original 1997 masters, and a forward by original drummer Ken Schalk. It is a piece that diehard Candiria fans will certainly want for their musical libraries.

Additionally, vocalist Carley Coma has also launched a series of videos for the band’s latest album While They Were Sleeping. The series dives deep into the story behind the album’s concept. New videos for each track are revealed in sequence each week. The latest clip, for the eighth track on the album “The Whole World Will Burn,” can be seen here.