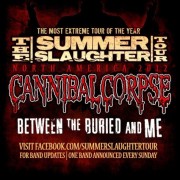 The official Summer Slaughter website announced today that one of the greatest bands on the planet, Cannibal Corpse, along with progressive death metal act Between the Buried and Me are the headlining acts for this year’s Summer Slaughter festival. Opening bands are being announced on the tour website every coming Sunday and tour dates are yet to be announced but we’ll keep you posted.

Cannibal Corpse will be touring in support of their upcoming album Torture.  Click here for more details on the release.