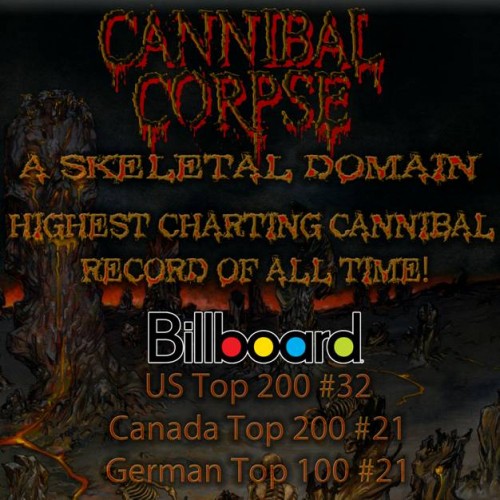 The 1:11 chainsaw to the zombie chic’s gut makes this whole experience worth it alone, but damn…Cannibal Corpse have done it again. A Skeletal Domain, their 13th LP, is the highest charting Billboard record in Cannibal’s gory history, landing at #32 in the Top 200 Chart for first week numbers. Remember, this is extreme death metal. There is a lot of pop and other crap to contend with and the Cannibal boys have done us proud.

Shit, I need to nap more often. I swear, I passed out and woke up in a stupor to late news of an impending Ministry “From Beer to EternaTour” (congrats to insanely great drummer AAaron Rossi on the impending birth of his kid) and a NEW Cannibal video!

If you can’t get enough of a desperate survivor going h.a.m. on some unruly undead, “Kill or Become” is for you.

Click HERE to watch it! “Fire up the chainsaaaawwwwwwwwwww”

+ be sure to check out an exclusive Metal Riot A Skeletal Domain interview with Cannibal HERE.