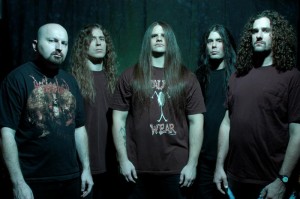 This box set is set to include all 12 full length albums in a 12 CD fold out case with new artwork as well as “Torturing and Eviscerating Live” on CD and LP picture disc recorded in Tampa Bay, FL in 2010 and Milwaukee, WI in 2012.

The box set will be available March 19th and is currently available for pre-order.

You can also catch Cannibal Corpse on the Decibel Magazine Tour this spring.