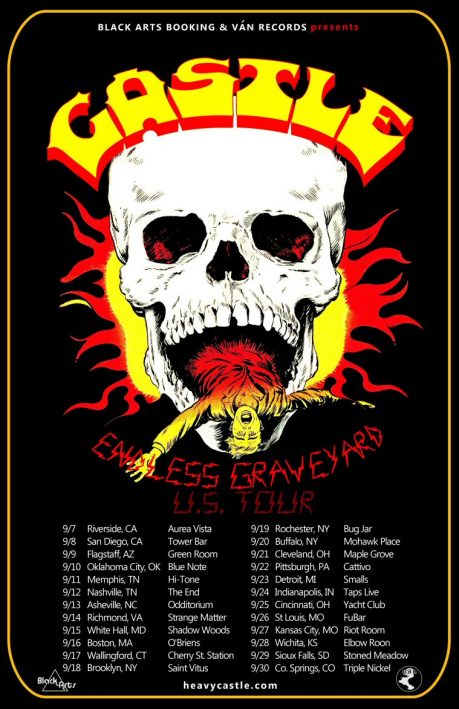 Saying Castle are the real deal is an understatement. Not only do they write material that is consistently near or AT the top of the heap for anything released the same year, they tour like wild zealous demon dogs burning up the road on the way to heavy metal Oz. And they are pretty much a perfect power trio, which is always the coolest band formation. Since the release of their most recent offering, Welcome To The Graveyard, which was issued last summer via Ván Records, CASTLE’s massive near two-hundred-date worldwide takeover has included tours of the US, Europe, Canada, and the band’s first ever tour of Japan last December. We still remain fairly in awe of these alleged humans.

Slated to begin September 7th in Riverside, California and come to a close on September 30th in Colorado Springs, Colorado, the band’s latest trek includes performances at Shadow Woods Metal Fest and Stoned Meadow Of Doom.
“We’re looking forward to taking a break from writing the new record and hitting the road for one more East Coast run this year to play Shadow Woods Metal Fest in White Hall, Maryland and Stoned Meadow Of Doom Fest in Sioux Falls, South Dakota,” issues the band. “Both fests offer all-out amazing lineups and we’re proud to be part of them. Plus, we’ll be playing lots of killer shows along the way and it’s very possible if you’re at the show you going to hear a new track or two.”

All dates for our faves Below.