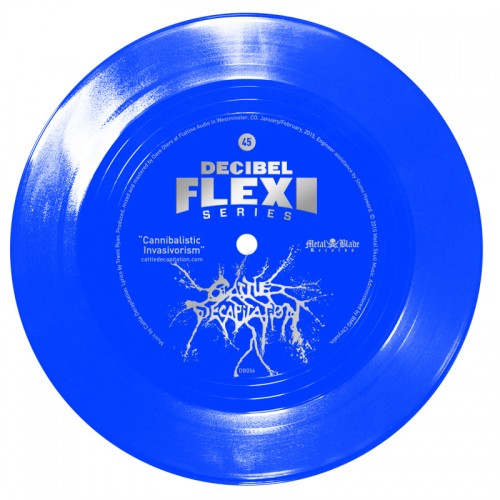 San Diego deathgrinders, CATTLE DECAPITATION, will make their Decibel Flexi Series debut in the August 2015 issue with previously unreleased track, “Cannibalistic Invasivorism.” The ravaging new hymn – which will not appear on the band’s forthcoming new full-length, The Anthropocene Extinction – is currently available for public ingestion courtesy of MetalSucks.

Expounds frontman Travis Ryan of the tune, “One thing we learned from our last couple albums was that an album’s flow can make or break an album and it’s an often overlooked part of the album-making process. We ended up with a couple songs that got squeezed out of the album’s flow that were naturally then deemed ‘bonus tracks,’ and the track ‘Cannibalistic Invasivorism’ was one of them. It’s a song about doing away with pestiferous, invasive species of life through eating them, similar to the invasivorism movement by culinary artistes who use things like snails, squirrels, etc., or any animal/insect that need their numbers thinned down in any given area or ecosystem to have a positive impact on the region. Of course, in the ‘turning the tables’ nature of CATTLE DECAPITATION, in this song we find the target being the single most invasive species on planet earth: the human being. Enjoy!”

Sample “Cannibalistic Invasivorism,” now streaming at MetalSucks at THIS LOCATION.

A limited number of issues which include the flexi are currently available for purchase HERE but hurry!