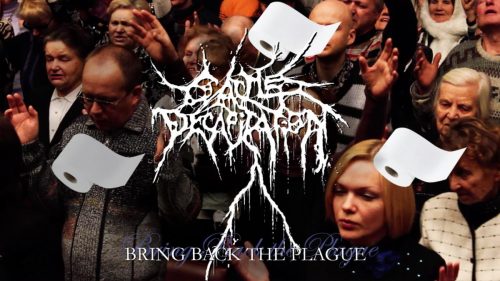 Cattle Decap have been pretty much my favorite band in death metal for quite awhile and Death Atlas is further proof it is hard to defeat them when it comes to meaningful and at times darkly cynical yet insightful extreme metal. I assume those of you who give a shit about metal probably know about the recent late 2019 release already so I won’t insult your feeble (oops) intelligence with too many details other than that it rules and you should get it. I honestly feel like an asshole that I didn’t review it when it came out but seasonal depression is a bitch and obviously we need to catch up on reviews right now, period. Haha, it isn’t helping that now that Spring is here we have a pandemic but I will try and post some cool album reviews for you hounds soon. Anyway, here’s a funny ass morbid video in the meantime. Ahhhhh. They have manage to kind of politely underscore what doomed fucking idiots the human race are yet again.

“With the cancellation of our ironically titled ‘Europandemic Tour’ and social distancing recommendations set in place, we found ourselves with not much to do. So we figured why not address the elephant in the room in the form of a music video for ‘Bring Back The Plague’ and just film it on our mobile phones instead of with an actual crew. Dave didn’t even have access to a drum kit and nobody is leaving their houses anyways so we decided to lighten the mood with a video. Everything from the band name to the lyrics to the merchandise to the imagery have always been heavily steeped in metaphors and irony always with tongue firmly in cheek, so this new video by David Hall at Uneasy Sleeper may just be our coup de gras…for better, or for worse.” – Travis Ryan