Cauldron announce tracklist and art for “In Ruin” 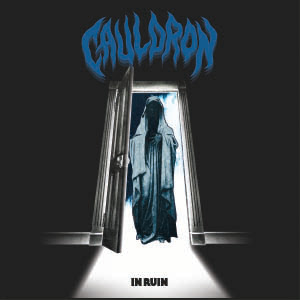 Toronto, Canada-based metal trio CAULDRON has just unveiled the album artwork and tracklist for their long-awaited fourth studio album,In Ruin, out January 8, 2016 via The End Records (out in Europe January 29 via High Roller Records). CLICK HERE to view the album details exclusively on Blabbermouth!

Says CAULDRON frontman Jason Decay, “We wanted a basic, straight to the point cover without going totally Metallica Black Album; something that catches your eye when flipping through the record bin. I saw a decrepit and eerie looking statue hovering in a doorway upon the In Ruin title. We expressed this to our friend Squid (who did the artwork) and I guess you could say its a cross between Poltergeist, Alice In Hell, and Intravenus de Milo?!”