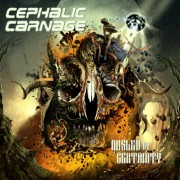 Cephalic Carnage are currently on tour in North American as part of the annual Summer Slaughter Tour. This tour, which also includes Decapitated, The Faceless, All Shall Perish, The Red Chord, and more, will conclude on August 23rd in San Francisco, CA.

Immediately following Summer Slaughter, Cephalic Carnage will embark on a co-headlining tour of Europe with Psycroptic. This tour, dubbed the “Initiation of The Misled European Tour 2010’, kicks-off on September 10th in Germany and also includes Ion Dissonance, Hour of Penance, and Dyscarnate.