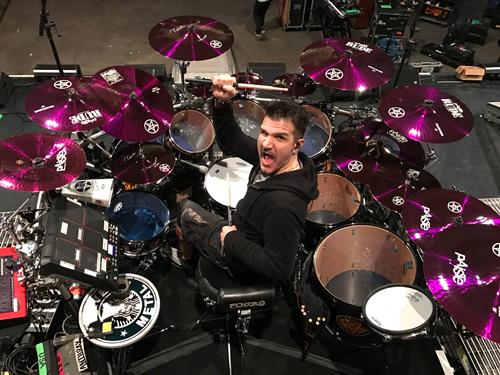 A bunch of cool bands from Life Of Agony to Tombs have branched out into the interesting realm of coffee sales on the side. This is not a joke. Whatever pays the bills or is a passion, right? I mean Purple Pam, Bad Brains and a bunch of other bands made hot sauce as well! And we know a lot of groups have made beer, from Daylight Dies to Sepultura Weizen to Kid Rock’s shitty “Badass American Lager”!

Anthrax‘s Charlie Benante loves coffee. This might explain how at his age he is still able to fucking out slay pretty much every other drummer in thrash with the debatable exception of Lombardo and Hoglan. Is caffeine the secret to the power of Suzerain’s intro? Who knows.

Anyway, having teamed up to collaborate with Chicago’s Dark Matter Coffee Co., his brand “Benante’s Blend” has undergone enhancements that include higher quality choice of coffee beans, a change in the way the beans are roasted that give the coffee a larger and more flavorful taste, and other tweaks, Benante and Dark Matter are proud to announce the relaunch of “Benante’s Blend.” 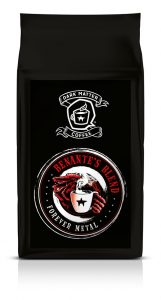 The coffee will still be available in two varieties, the “Be All End All” blend which is a dark roast with a real kick, and the “Forever Metal” blend, a milder coffee.  And, despite the upgrades, Benante is keeping the price the same.
“I’d been hearing about Dark Matter for awhile,” said Benante.  “They’re based in Chicago where I live, so I tried some of their coffee and thought it was great.  We hooked up, I went down to their headquarters and spent a day there just talking coffee, doing some tasting and I have to say, I felt like I was part of this coffee family.  Everyone there really enjoys the art of coffee, as do I, so this was something I was really interested in being a part of.  We worked together to come up with what I feel is a perfect cup of coffee, and I’m happy to say that my Benante’s Blend is under the umbrella of the Dark Matter coffee family.”