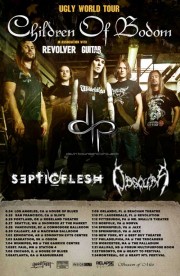 Hard partying (and harder rocking) Finnish band Children of Bodom (or COB) has announced a North American headlining tour in support of their just released new album “Relentless Reckless Forever” which landed at #41 on the Billboard Top 200 in its first week of release. Brought to you by Guitar World and Revolver, the month long summer tour will kick off in Los Angeles on June 24 and run through July 24 in Montreal where COB will perform alongside KISS, Motörhead and more as part of the “Heavy MTL” hard rock festival.

“We are psyched to see all of our friends in North America and to play our new songs live for all of the Bodom maniacs,” commented COB guitarist / vocalist Alexi “Wildchild” Laiho. “Get ready to throw it down!” Support on the Children of Bodom tour will come from Devin Townsend with openers Obscura and Septicflesh rotating positions each night.

Recorded in Finland with famed rock producer Matt Hyde (Slayer, Monster Magnet), “Relentless Reckless Forever” is the seventh studio album of Children of Bodom’s illustrious career. COB’s high-energy hooks and electric energy forge stadium-sized heavy metal anthems that seethe with both marvelous musicianship and a phenomenal pop prowess. The first single and video from the album is the “party song” “Was It Worth It?”. The “Was It Worth It?” video was filmed on location at Pennsylvania’s Action Sports compound Camp Woodward and sees COB join forces with two-time X Games gold medalist and two-time Thrasher magazine “Skater of the Year” Chris Cole and noted pro skaters Jamie Thomas, Garrett Hill and Tom Asta to deliver a one-of-a-kind “audio and visual experience” that perfectly captures the band’s live intensity. Check out “Was It Worth It?” today at this location.