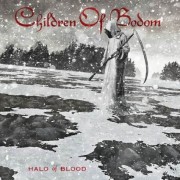 Finnish extreme metallers Children Of Bodom have released the first trailer for their upcoming album Halo Of Blood.  The trailer was filmed at a listening party held at Nuclear Blast headquarters in Germany and gives some of the initial opinions of the international press.  Recording was taken care of at Danger Johnny Studios in Helsinki, Finland with the help of recording engineer Mikko Karmila, and Swedish producer Peter Tägtgren who was called in to handle keyboards and vocals. Mixing was handled at Finnvox Studios in Helsinki.

To check out the video for yourself click right here.

Halo Of Blood is scheduled for release June 11th through Nuclear Blast of course.  This will be Children Of bodom’s eighth full length release and the follow up to 2011’s Relentless Reckless Forever.   Guitarist/vocalist Alexi Laiho recently stated about the album:

“‘Halo Of Blood’ is the eighth studio album from Children Of Bodom, and believe it or not, but we still managed to keep it fresh and new while still maintaining the elements that make COB sound recognizable. It’s got the fastest and the slowest song we ever made and lyrics wise there are themes we had never had before. It’s 10 new songs of pure Nordic metal and whether you enjoy it with a beer or a glass of water, I’m sure you will have a good time.”[youtube]http://www.youtube.com/watch?v=INzpnD1HyNA[/youtube]