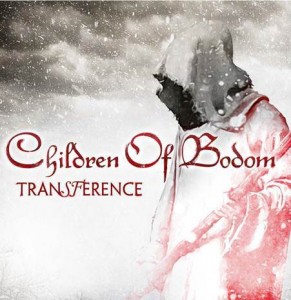 Finnish headbangers Children of Bodom just released the first official track, “Transference,” from their upcoming eighth studio album, Halo of Blood, which will be put out June 11th via Nuclear Blast. The album can be preordered now via iTunes, and you can download “Transference” instantly if you do so.

Alexi Laiho, lead vocalist and guitarist, said this about the track:

“Transference is a straight up Children of Bodom to the core type song and therefore was a good pick for a video and obviously is one of our favorite tracks. It always had an evil vibe to it which I wish I knew how to explain because it still gives me chills… Enjoy!”

CoB recorded Halo Of Blood at Finland’s Danger Johnny Studios  with recording engineer Mikko Karmila, who worked on Hatebreeder, Follow the Reaper, and Hate Crew Deathroll with the band previously. The album was produced by the band and Mikko Karmila, and mixed at Finland’s famed Finnvox Studios.