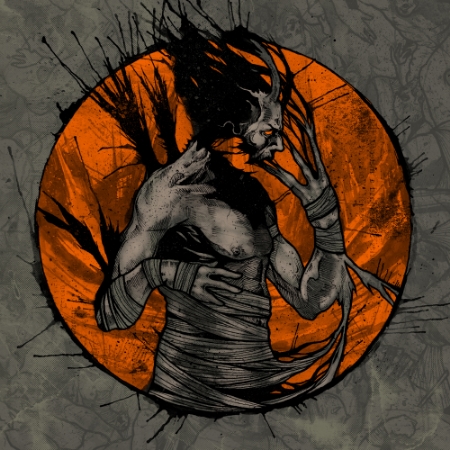 Enabler announced the impending release of their second full length “La Fin Absolue Du Monde” the other day and the artwork from Chris Smith of Gray Aria Design Studio (& a proud member of the Pitts, PA band’s Meth Quarry & Hindsight) has been revealed. Smith is a popular illustrator in the Pittsburgh scene and shares his thoughts on how he became involved in crafting the visual look and feel of the forthcoming Enabler release.

Chris Smith: I first saw Enabler 2 years ago here in Pittsburgh at Roboto with Cop Problem and Neon Warship. All three bands blew me away. I had already done some art and merch for Neon Warship at that point. Cop Problem was just bonkers – I met Josh (Cohen) their drummer, through a mutual friend who writes for Josh’s online entity – Blow The Scene. Enabler came on and completely floored me – they had a second guitarist and Andy Hurley behind the kit at that time. I went ahead and scooped up all their music and some merch as well. Enabler stopped back here for a stacked show with Tragedy headlining at The Shop last August – a day before I was to leave for my Adirondack vacation. The show was awesome and all the bands were great. Enabler had released All Hail The Void and Shift of Redemption earlier that year. After the show, Adam Thomas (No Time/Blood Pressure/ex-Heartless) was asking people if they had somewhere for Enabler to stay – so I told them I lived right down the street and they could stay over. We hung out at the house for the remainder of the evening and the next morning they were off to Philly. Jeff mentioned hitting me up for art for future Enabler endeavors before leaving.”

“Ok, Fast forward to to winter 2013 and Jeff calls me up and asks if I’d be down for doing the art for the new release for 2014. I was all over it – I knew it was sure to be a banger of an album. He had me watch one of the Masters of Horror movies by John Carpenter entitled “Cigarette Burns” – I was familiar with Masters of Horror, but hadn’t seen that particular film. The film, in short, is about a rich movie memorabilia collector hiring an investigator to find a rare print of a cult movie that was said to kill those who watch it. The film in the movie shares the same title as Enabler’s album – “La Fin Absolue Du Monde.” I watched it and got some ideas via the imagery in the film. I started sketching and sent that over – They seemed to really dig it. We chatted back and forth about ideas and formatting for the album. The primary cover is my rendition of the imprisoned angel character from the film with it’s clipped wings. The secondary illustration is a interwoven collage/orgy of demonic characters which serves as the backdrop to the cover and appears on the insert to the LP, on and behind the CD, and on one of the merch designs. The titles and lyrics were hand written by me and Jeff. As with any release – there were multiple changes along the way in various departments ranging from who it is being released by to formats to art and design tweaks. I ended up just going all out with the art for Enabler – they will have a whole new line of shirts for their (extensive) tour, as well as the album art and associated merch that will go along with the pre-order bundles. I did a poster for their Pittsburgh date (playing with Die Choking, Black Mask, my band – Meth Quarry, and Rabid Pigs) which also got turned into a shirt. I will have some limited prints of that poster for the show as well. So all in all it was a big success! We all are very happy with the album, the art, the label, and the pr (The Compound) going into it. I think people will be very pleased with the outcome of the whole process. All the parties worked hard to get this album to your ears. It will be released this spring via Creator-Destructor in digital, vinyl, and CD format. Thanks to Jeff and Enabler for letting me handle the art and design on this and for putting together a hell of an album!”

Stay tuned for more Enabler news as soon as we get it! 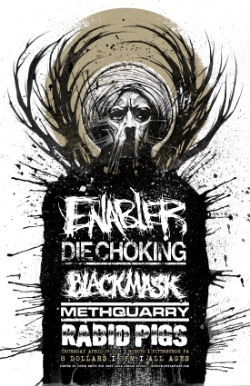 More On: Punk, Release, Enabler, The Compound
share on: