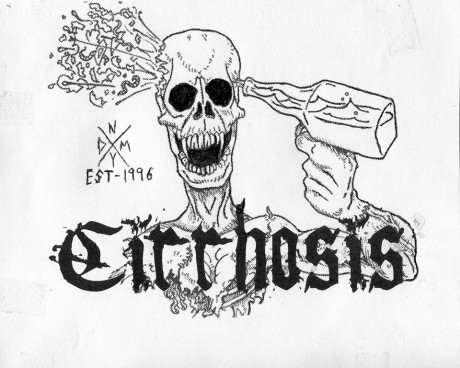 Over many, many years I have played shows with various incarnations of CIRRHOSIS on the same bills . The band has had a lot of line up changes over the years and some close friends and even ex members pass away. I was just saying to my good pal Mucus Cirrhosis “don’t let the kingdom suffer the quarrels”. We’re all stronger when we work together, survive and rage. Mucus and Aaron Morris have always shown me nothing but respect , so I’m thrilled to have them writing a creature from the black lagoon type song for Metal Riot’s Creature Honeymoon HALLOWEEN Compilation! More details soon! Almost all the bands have been announced!

Halloween comp artwork (by the powerhouse Kim Zangrando) reveal in next few weeks! But we are stoked to say that Tyrant Of Death ,MongrelBand, The Great Goddamn, Fad Nauseam, Golden Torso (ex-Kylesa), Night Viper (ex-Church Of Misery), GET OUT. , Geezer and Septa are locked in. The last few slots are mainly “filled” but working out recording logistics, etc. This is shaping up to be a rad “Metal Riot Creature Honeymoon!”

“i spent many late night watching all three classic movies. i tried to get into the creatures head. ……This deadication to the Gill-man is a tribute to his lonesome agony in the abyss and a graphic tale of how mankind invaded his solace and they all got slaughtered” – Mucus Cirrhosis.