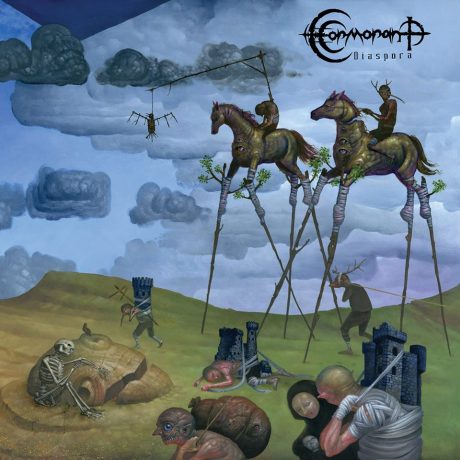 Sometimes I get accidentally death metal bougie and forget I have heard records before the release date often when the general public hasn’t. To be fair, I listen to a lot of promos for this site and it isn’t always easy to keep the release dates in mind. The most important thing though is to remember if the album is good and beyond a doubt Cormorant‘s Diaspora is one of the must hear releases for the scene this year.

No Clean Singing hosts the official stream today for the Bay Area band of the progressive deathers and it will blow you away. Do NOT be left in the dark regarding one of the most important extreme records of 2017, full of lengthy yet engaging and soul churning performances. “Preserved In Ash”
in particular is a tornado of intense emotion paired with the tempered focus skilled musicians bring to complex arrangements yet with neither subordinate to the whole affect (plus you gotta love that statement of intent drum intro).

Hear Diaspora at THIS LOCATION.
No Clean Singing crowns Diaspora the band’s, “most extravagant and ambitious album yet,” furthering, “Whether it’s the feverish, chaotic drum work and snarling vocals of ‘Preserved In Ash,’ or the doomier, proggier strains of ‘Sentinel,’ CORMORANT rarely (if ever) seem content to simply rest on their laurels, and each of the four tracks which make up this album are absolutely packed with a wealth of unexpected twists and turns – moving swiftly back and forth between moments of ferocious blasting, moody melody, grandiose riffery, and ominous atmosphere – all designed to keep the audience on their toes and to prevent them from ever becoming too comfortable or complacent. As a result, Diaspora can be a challenging, even demanding, listen at times. At just over an hour in length it certainly isn’t for the faint of heart, and requires a solid investment of time and mental energy from the listener to appreciate fully, but this devotion is ultimately rewarded tenfold with one of the most diverse and dynamic musical experiences of the year.”
Diaspora will be released independently on 2xLP, CD, and digital formats on August 11th with US and European distribution through War Crime Recordings. Preorders are currently available at THIS LOCATION.