Corrupt the young with this Slayer lullaby album. 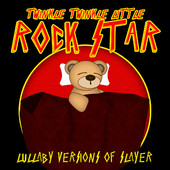 Slayer used to soothe me to sleep when I was completely suffering from booze induced nervous system collapse back in my overly stressed college days, but an album of Slayer lullabies? That’s crazy talk.

From the Press Release: “They said it couldn’t be done.  Some may have suggested it shouldn’t be done.  How on earth (or somewhere much hotter) could you possibly take the music of thrash metal kings Slayer and turn them into haunting yet soothing lullabies?  We could tell you the six hundred and sixty-six ways we did it, but you’ll just have to listen for yourself.”
Twinkle Twinkle Little Rock Star is proud to release “Lullaby Versions of Slayer” featuring lush instrumental versions of 12 classic thrash tracks. Fans can now share their love of metal with those little ears not quite ready for the amps cranked to 11.
Click HERE for track listing.
Lullaby Versions of Slayer

This is even more obscene than the A.C. style LBGT Slayer tribute band I was going to start with my old friend Ryan from that show “Oddities”. We were going to call the band Gayer and have songs like “South Of Kevin” and “Foreskin Mask”. Oh well, looks like I dropped the ball twice.