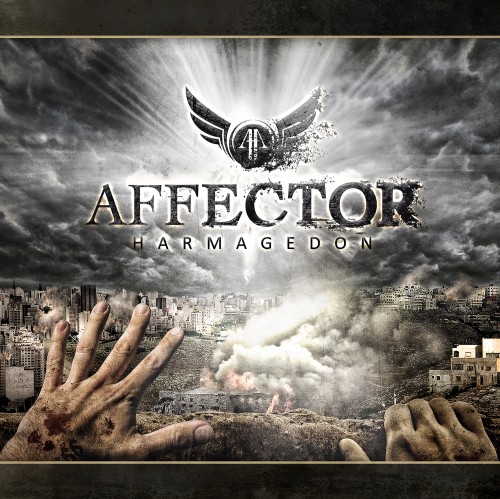 Affector fans made their voices heard to put Affector’s latest release, Harmagedon (InsideOut), at the top of May’s Ultimate Cover Art Showdown with 52% of the vote! Affector drummer, Collin Leijenaar, and designer, Daniel Latsch, took some time to comment on their win and the album’s cover. Check out their comments here.

You can also like us on our Facebook page to stay up to date and check out the covers and comments from previous week Cover Art winners.

Affector drummer & percussionist Collin Leijenaar comments: “We are VERY honored by winning the May 2012 Ultimate Artwork Competition. We think it pays tribute to the great artwork of Daniel Latsch. Thanks for your support and hope to see you on tour someday!”

Affector designer Daniel Latsch comments: “I feel honored that the cover artwork of AFFECTOR´s Harmagedon has won the May 2012 Ultimate Artwork Competition. It confirms that it was worth the time and efforts spent into this album since the first demos had been written years ago. It was meticulously edited until the final release in order to convey the concept of the album literally in one picture. This was a huge endeavor because I really had to get into the lyrics. More sceneries began to arise in my mind and they had to be put into the artwork so it had to be edited over and over.

“My friend and guitar teacher Daniel Fries [Affector guitarist] offered me the chance to give AFFECTOR a true face. I feel drawn to the band and guests and of course the music itself. The work on the album cover reflects my passion for the music and I still can´t believe I really got to know some of those famed guys. I´m so proud of the band and what they’ve created.

“Finally I´d like to thank all the fans who helped us out in winning this contest; and the other artwork artists, who do an amazing job. Stay creative!”