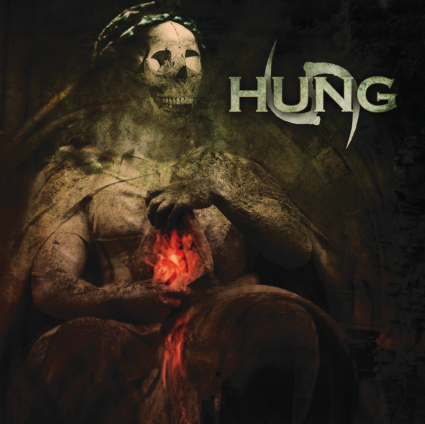 Hung fans have spoken and declared their self-titled debut album the winner of May’s Week 2 Cover Art Battle (Spells, Livestock, & Bones) by winning 1/3 of that week’s total votes. Hung and artist Summer Lacy took some time to comment on their win the album’s cover art. Check out their comments here.

You can also like us on our Facebook page to stay up to date and check out the covers and comments from previous week Cover Art winners.

Hung bassist Sam Roon comments: “I couldn’t be happier about winning the Metal Riot album art contest! Hung has a huge amount of respect for art and album artwork is no exception. When it came time to produce it, we selected Summer Lacy who has a unique eye and a special talent for digital art. Her inspiration for the artwork was Hung’s music and lyrics. I’ll let her speak to that, but I’ll say it was really cool to see a visual interpretation of something we only think of sonically. We were very lucky to cross paths with Summer, and clearly by winning an artwork contest, we made the right decision! Thanks Metal Riot!”

Summer Lacy (artist) comments: “When I first heard that Hung was in search of artwork for the new album, I was ecstatic to have the opportunity to work with them. Since they were still immersed in the recording process, I used their lyrics and the music of their Progeny EP to help inspire the visual representation of the sonic experience you get from listening to their music. Hung’s sound is dark and transcendent, full of layers. I wanted the artwork to reflect that. We went through about 3 or 4 drafts before coming to the final cover art. The first draft was initially inspired by the 3 of Swords and Death cards in a Tarot deck. These particular cards encapsulate many of the themes (sorrow, falling from grace & betrayal) described in the lyrics. By the final draft, I decided to aim more abstract and obscure, leaving it to the audience to fill in the blanks for themselves. When you pick up the physical CD, you’ll see that the cover artwork extends like a landscape into the next 2 panels and the inlay, allowing the artwork to harmonize with the entire package.“