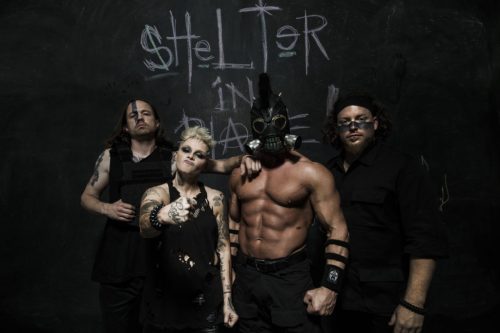 Sitting around quarantine and thinking back to bands I have been in that had members who would argue if it was cool or not to play covers made me think it might be neat-o to showcase some covers by one artist on the site today. OTEP seemed like a good pick because A. She rules as a person and has always been cool to our site and B. Just look at that “Shelter In Place” message behind the band photo. Wise choice during Covid-19, fam. And I think that photo is older than last year? Prophetic!

Anyway, OTEP rocks and the real best reason to choose some of the band’s best covers is that THERE ARE A BUNCH OF DOPE ONES TO SHOW YOU. Seriously, some bands are so snobby but it is cool to show your influences. I thought it was cool how when Chester from Linkin Park died even Chris from Coldplay wasn’t too “big” and covered “Crawling” in his memory.

Here’s four tunes poet and nu-fusion groove metal activist Otep Shamaya chose to cover with her band over the years.

2. ‘Not To Touch The Earth’ by the Doors is my favorite OTEP cover because as a poet Shamaya really vibes with Jim and respects the material and also because it is cool to hear one of the most intense “bad trip” doors songs ever (and not the most obvious cover choice from the band’s tunes) become straight up metal!

4. Lorde’s ‘Royals’ lyrically is a great choice and this one remains a fan favorite in the Tribe. We’re in this together so hope this makes quarantine or whatever you are going through a little more bearable as we have money fears and the future is even more uncertain, fam. One love. PMA.