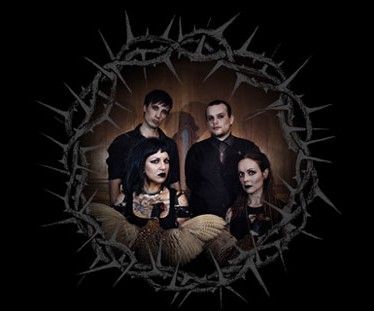 Head to our Metal Riot  bandcamp page after you are done perusing the new Nightmare Before Christmas fashion line to take your sense of darkness further into the black (no disrespect to Sally, Jack and Zero). Yes, our Halloween compilation of bands from around the world (and a slew from my hometown of Kingston, NY- a place full of ghosts due to a rich colonial history), is shaping up to be quite phantasm-tastic.

Every week until Halloween we are revealing more bands who participated in writing a horror themed song and I’m white with frightful delight at what everyone has brought to the table!

It’s awesome to have them all on board. Golden Torso’s drummer Jeff used to play in Kylesa (on my fave album of theirs Time Will Fuse Its Worth) and I met him years ago at a show. We’ve since stayed in touch sporadically and he’d tell me about cool bands from his area like Child Bite or shoot the shit from time to time. Golden Torso have given us one of the more ferocious songs on the comp with “Flesh Walkers”, a zombie song that hits with punk n roll noise metal fury.

“Well- let’s just say it’s about someone cursing their deceitful lover who is turning into a Pink Floyd The Wall-like melty-fleshy, inflamed hollow-faced, lumbering, zombie undead in New Orleans,” Jeff says, when pressed.

Shadow Witch supplied a theme song with the same name as the band, a super stompy doomer that rocks like some of the best Alice In Chains meets vintage Sabbath glory. Vocalist Little Earl is a glorified warlock.

Fad Nauseam’s Brad Omen describes his bands 7-minute “From The Mouths Of Blades” semi Swans-esque masterpiece of a track with ,”It’s about humans being inherently evil from birth”.

We support this message!

The full comp will be out on Halloween, so stay tuned and enjoy what you’ve got so far!