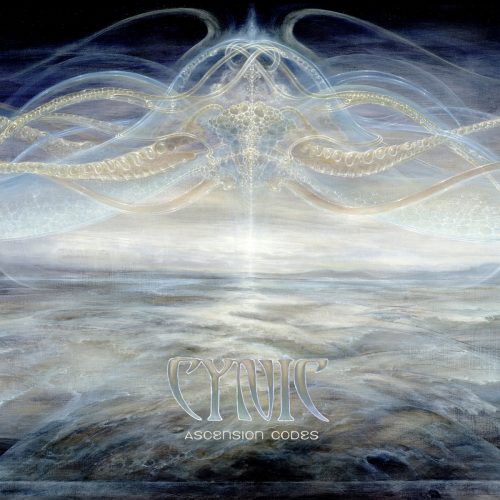 Paul Masdival’s CYNIC releases Ascension Codes on November 26th and the progressive rock community is awaiting it eagerly (seriously, the vinyl looks like it is going to be lovely). The band is now sharing a preview and video teaser for the track “Diamond Light Body,” featuring artwork by visionary artists, Martina Hoffmann and Robert Venosa. Design and animations by Randy Gaul and Jonatan Martinez (the latter worked with Masvidal on the Mythical Human Vessel trilogy). The full track is available on their Bandcamp to hear, incidentally.

“Diamond Light Body is a song that emerges from the ashes like a phoenix” says Paul Masvidal, Cynic founder.

Also, ICYMI: Masvidal recently shared a touching tribute to late bassist Sean Malone, who died on December 7, 2020. To commemorate Malone’s legacy, CYNIC has released a never-before-heard recorded performance of the song “Integral,” in which Malone performs fretless bass.  “Integral” was originally released as a solo guitar and vocal track on Cynic’s Re-Traced EP. The emotional tribute can be found at THIS LOCATION.

As an act of support, CYNIC is inviting fans to donate as you wish for the “Integral” song download, which comes with a guitar/bass transcription of the song and an instrumental (no bass mix) to play along with. 50 percent of proceeds will be shared with suicide prevention organizations: To Write Love On Her Arms (TWLOHA) and The Trevor Project. The remaining will go towards funding a documentary about the lives and artistry of Sean Malone and Sean Reinert.