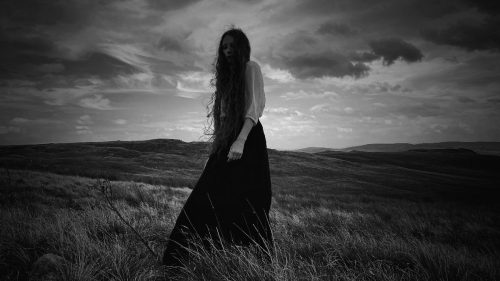 DARKHER made a surprise appearance at this year’s digital Redux edition of the trailblazing Roadburn Festival on Friday, April 16 at 13:30 CEST with the exclusive premiere of a brand new video clip featuring an acoustic version of the song ‘Love’s Sudden Death’ that will be featured electrified on the forthcoming new full-length of the English dark doom act, which has not been scheduled yet.

DARKHER comment on the clip: “This acoustic version of ‘Love’s Sudden Death’ was recorded in the woods of  Hell Hole Rocks in Heptonstall, West Yorkshire at dusk while the rooks were settling in the surrounding trees”, tells British artist Jayn Maiven. “The song  is a dark romantic ballad taken from Darkher’s forthcoming new album, which was heavily inspired by the mood of this ancient landscape and how it reflects the emotions within –  dramatic, beautiful, and sometimes bleak.”

The ‘Love’s Sudden Death’ video was premiered on Roadburn’s Redux edition on April 16, 2021. It was filmed by DARKHER and R. Shooter and edited by DARKHER.

DARKHER are the brainchild of singer, guitarist, composer, lyricist, and producer Jayn Maiven, who founded this solo-project in 2012. One of the more entrancing voices in modern music, Maiven’s work never fails to stir recognition as well as questions from a deep place in the soul.

Christopher Smith, who has contributed to previous releases,  the forthcoming album, and live shows has meanwhile been added as permanent drummer to the line-up of DARKHER.