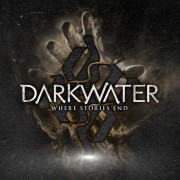 Swedish progressive metal band Darkwater have released a video promo for their forthcoming album “Where Stories End.”  “Where Stories End” is scheduled for release on November 12th in Europe through Ulterium Records and November 23rd in North America through Nightmare Records. “Where Stories End” is the follow-up album to the bands successful debut album “Calling the Earth to Witness” that was released 2007 and gained excellent reviews around the world.