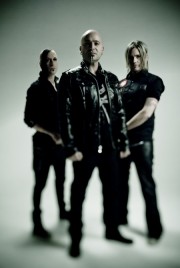 Dave Mustaine, guitarist and lead singer for thrash metal mainstays Megadeth, has confirmed Device (David Draiman – Disturbed) for his tour, Gigantour. Mustaine made this confirmation on Saturday Night Scream, a radio show out of Syracuse, NY. So far Device is the only other band announced for the tour and no dates have been released.

Check out the interview here and the official announcement on the Gigantour Facebook page here.

Megadeth are slated to release the follow up to 2011’s Thirteen on June 4. That album will be entitled Super Collider.