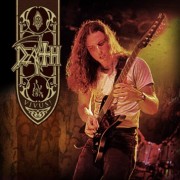 Floridian death metallers, Death, have release a live version of their song “Zero Tolerance” off their upcoming collection “Vivus!”. This track is from the first disc “Live in L.A.” and the second disc is “Live in Eindhoven,” and both of the recordings were from 1998 concerts.

“Vivus!” will be released February 28th in North America (March 2nd in Germany and March 5th for the rest of Europe) through Relapse Records.