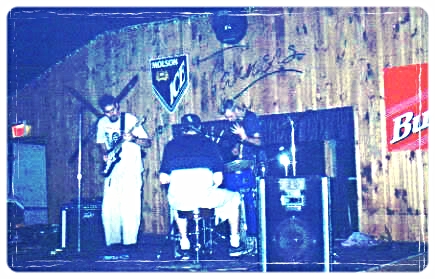 This Deep Cuts we are going to look at different eras of Coheed & Cambria, including some Shabutie early stuff.

The band known as Coheed nowadays was called Shabutie for their first near decade (I round up after 5 years), from their Backdoor Nyack days to Turbine Blade. Some people don’t consider them the same bands, and it is very true that Josh Eppard coming on board had a huge role in shaping the Coheed sound most people identify with today. There also wasn’t really a concept story until they started to become Coheed & Cambria.

For me, having grown up in the Woodstock/Kingston and Nyack scenes with those guys, it is pretty much the same band (though it is hard for me to think of it without Mic Todd next to Claudio as the same band and I still don’t know the new bassist’s name. Sure he is a nice dude and I liked the video I heard/saw for the first Afterman single. ). That’s one of two Coheed songs (‘The Running Free’ is the other) I have heard since Good Apollo Pt. 1, because I couldn’t listen to them in the years in between without getting clinically depressed. I’m trying to change that now.

My favorite Claudio Sanchez riff is still the bridge of Shabutie’s “Godfather’s Lollipop”. That to me was always, like, Claudio’s Luke Skywalker of riffs. He’s written good things since, for sure. But a lot of the force was in that “Godfather’s” riff. Good times. I again, just heard a track from YOTBR for the first time today, and turns out there is a video for it (haha…so not that deep a cut!) but it was new and refreshing to me. And the lyrics are about letting go, which is cool. It is so weird the relationship I have to their music. So much love and hate and raw shit. But good stuff as well. I have played so many shows with those guys over the years, it’s crazy. But not in near a decade now.

Shabutie had so many hundreds of songs. I wish people knew more of them.  A lot of people only heard them because Nate and I put them out free. “Cassiopeia” was my favorite live song of their’s, and it is great to hear their early Jane’s, Smashing Pumpkins and Deftones influences. I helped put out a compilation in the late 90’s with a K-Tel style cover my dad and I mocked up for fun. The compilation was put out by our friend Tom Morreti’s local label Error 404 Records and featured 2 Shabutie songs. Check it out HERE! There’s also a message board thread on Cobalt featuring Dave Parker (Wavis) about it HERE. Dave was in DIVEST with me and then Counterfeit Disaster, Weerd Science and was Coheed’s touring keyboardist for awhile.

“The Telling Truth” is my favorite track of the band incarnation I most consider Coheed. It is really an epic masterful performance from everyone, especially Mic and Josh. How sick is this song!?!!

Original drummer and band co-founder Nate Kelley (now of Johnny Neutrino & The Secret Weapon near Philly, formerly of Woodstock’s DIVEST and Pontius Pilate Sales Pitch ,along with myself) is my best friend. He had a long and tense few years of bad blood between him and the Coheed guys once he left the band. I think we were all always kinda trash talkers. I remember when Nate was in Shabutie, Claudio Sanchez had a song called “Pictures of the Sun” and Nate drew a picture of a sun and pissed on it and handed it to him. “Here’s your picture of the sun, bitch.” Something like that. Or Josh rapping really roughly in Weerd Science about a girl who was trashy and unloyal to his friend. Nobody pulled many punches over the years and it got really ridiculous and painful. Shit, Apollo was Nate Kelley’s dog’s name growing up  and we thought that was a jab at Nate. Not that we were helping when Nate and I would make jokes about Josh never playing “Delerium Trigger” live the same way as Nate, or other unproductive public remarks against Coheed running counter to fence mending language.

DIVEST , who I sang for, were around in 2003 and we were produced by same producers as Coheed and Dr. Know/Gary of Bad Brains (who dates my cousin nowadays and is my favorite guitarist for life). My sister’s name is Cambria. DIVEST (originally called Bleed Theory or Brain Fuck Daddy with Josh Eppard on drums) shared members with Coheed/Shabutie in various incarnations over the years.

I haven’t talked to Mic Todd since 2006. We used to be great friends and bandmates even at times. We fell for the same girl. I’ve never been able to shake her. They are divorced now and I spent the last several years seeing her. When they were together  I felt like I was one of only people trying to help him not die from drugs (around time of their big tour with A7X years ago when Rev was alive) and yet I was a hypocrite because I was drinking myself to death and publicly arguing with the band. I was worried and I don’t feel bad about that concern, especially since what happened to Mic when he robbed the pharmacy. But yeah,  I had many blackouts and so it was wrong of me to act high and mighty, since it wasn’t the whole source of my grief. Thanks to CoCa’s Josh Eppard’s uncle John The Baker and my bandmate in Antidote 8 (my current band)- bassist Dave Daw (formerly of Counterfeit Disaster with Josh Eppard & who did an anti-drug song “Devil’s Handshake”, also with Travis of Coheed), I am able to see that things were more complicated and no one really hates each other, hopefully. Loyalties and friendships were strained and confused. Everyone partied too hard. I was really mad that Coheed’s manager seemed to me to keep Mic on tour after he needed help recovering from drugs.

This HERE is an Antidote 8 song I wrote (lyrically) for Mic Todd called “Take It To Heart” hoping he would quit drugs. It references “The Running Free”, incidentally.

And then again, when Nate Kelley and I were in Pontius Pilate Sales Picth together (after DIVEST broke up and around the time of Counterfeit Disaster) we had a dead pool at one point on those ‘Heed dudes with drug problems, so much did we want to help them but were bitter and super drunk and pathetically self-destructive ourselves. And then this interview I did with Liam from Dillinger around the time of Ire Works and Chris P. (ex-Dillinger drummer) joining Coheed was awkward for me.

Much love also to Dan Grimsland and Joey Eppard of the bands Three and The Grape & The Grain for helping bring me back to earth.

I have quit drinking for good and it has been 9 months. I literally can not do it. People in our scene died of substance abuse problems (Jason Foster of the band Three, among others) and people almost died (myself, Josh, Mic), but I am really happy for those of us who are sober or semi-sober and around and healthy to any degree today. I love all these people very, very much. I’m really proud of everybody in that I pray we have done more good than harm in our lives. One Love. PMA/24/7 everyday.

how cautious we have become

Leaving it hooked & off the floor.

To think the better you might have know…with age.

you wake a picture instilled the way

I wish you had lived with cause through pain.

No matter, you died the same…Machine.

So tell me like you want to, if you want me too.

(Here they come to rock your body all night)

When who’s to blame.

purely suggest we tell the truth.

From here on out we walk the straight…afraid.

What will they do

should we weather this new reply?

From shameless motive to hollow sin. (I always thought this line was about Nate Kelley and myself, since Shabutie had a song called “Shameless” and my band DIVEST had a song called “The Hollow Point”. We all hated each other around the time Prize Fighter inferno dropped, so I thought it was a kiss off. Margeretteville is a town near Woodstock where Mic Todd grew up and I thought Claudio was making fun of the local scene here now that they’d gotten bigger. It made me really mad. And I thought he was dissing my sister with the band name, eventually. Thankfully now I am almost 35 and there are much bigger things to worry about.)

Cause I don’t want you come around here

I just want you to go.

I just want you to know.

Thanks, y’all. Now click HERE for the most recent Deep Cuts on Vivian Campbell. “Stand Up & Shout”.