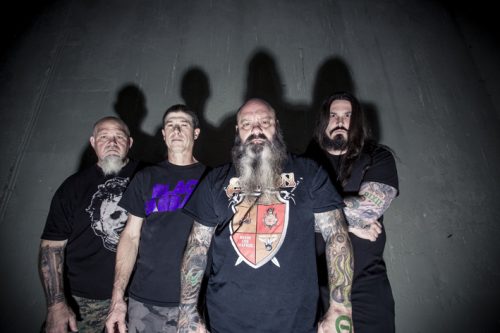 Few bands reward die hard fans over and over again as well as the metallic sludge cavalcade that is Kirk Windstein’s long adventuring CROWBAR. One of the most potent to this very day veteran bands and one of the first more extreme groups I remember being really blown away by many years ago on Headbanger’s, CROWBAR have delivered album after album and monster riff after monster riff.

The band has some of the most revered heavy gems and arrangements in metal to true metal fans and yet also speak in the eternal secret language of the real underground, purveyors of shadow hits that are the “lifesblood for the downtrodden”, so to speak. Like Candlemass, The Obsessed, Orange Goblin or other bands who are not as big as Sabbath but row in equally heady and heavy waters, CROWBAR are hugely inspirational for those who furrow the brow and trudge through this world while carrying a lot of it on their back.

Today we usher CROWBAR into our DEEP CUTS vault, revealing our choices for three songs from the band that we think are lesser appreciated and yet truly bad ass numbers.

“Behind The Black Horizon” is a darkly melodic and ingenius cut from my favorite era of the band, Odd Fellows Rest. Check the song out HERE. This record turns twenty this year and still sounds ahead of most sludge and doom bands.

The line-up of Kirk, Todd Strange, Sammy Duet and Jimmy Bower was un-fuckwithable.

“Let Me Mourn” on the masterful Sever The Wicked Hand is a top latter day CROWBAR song for me. The sorrow in Kirk’s voice and the audible wrestling of demons over not being able to help a self-destructive person are very affecting when paired with the monster, driving riffs. The whole band really nailed the performances on that record.

If you have never heard the pulverizing version of “High Rate Extinction” that opens crucial and under-appreciated live and nearly forgotten EP LIVE + 1 you need to blast it right now. It was this little live record that really cemented my love for the group after I “borrowed” this record from Ryan Matthew Cohn years ago.

The chugging death march that repeats throughout the song and Kirk’s insitence that ,”You know you never will…be free” was grim and obstinately bold. The band clearly didn’t even give a fuck if you liked them, despite Kirk insisting it was good to be their to the crowd on the recording. But you get the feel that regardless they were going to smash down all the walls of the venue with the power of the riff.