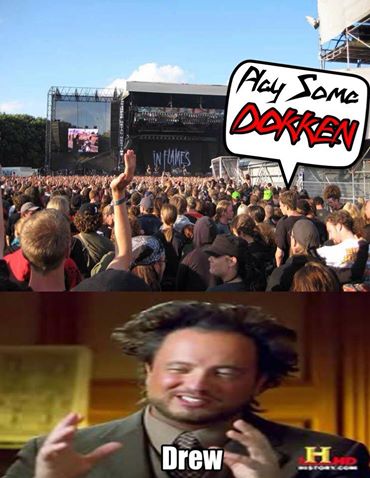 “So Many Tears” From the 1987  album Back For The Attack – this was a song about sucking it up and moving on. I don’t know if this was written about someone in particular, but with lyrics like “there’s only so many tears you can cry, there’s only so many ways you can say goodbye”, it feels pretty real, which is why I had to put this one on this list.

“Prisoner” I don’t usually like doubling up on an album, but Back For The Attack was a virtual goldmine for epic metal. A song about being stuck in a relationship, unable to walk away. Kinda sums up my addiction to DOKKEN songs over the years!

“Santa Claus Is Coming To Town” Yeah, I know, a Christmas song. The most un-metal holiday, but DOKKEN made it rock. Back in 2007, a compilation came out called “Monster Xmas”, featuring bands like TWISTED SISTER, SKID ROW, and of course, DOKKEN. This is one of my top favorite Christmas tracks to play every year as I wrap presents and get drunk on a 3/4 Captain Morgan, 1/4 egg nog concoction. DOKKEN took the famous Christmas carol and set it to George Lynch’s monster of a riff from “Dream Warriors” , and they made it work better than the original song. Let it be known, if I knew Santa Claus was coming to town and he had the mighty DOKKEN with him, I’d be on my best behavior all year round!

Fun fact: if you re-read the DOKKEN “Deep Cuts” article just once, and drink every time I use the name DOKKEN, you’d be hammered by now.

Additional fun fact: Dokken’s Christmas song has yet to reach 9,000 plays on Youtube at the time of this “article”.