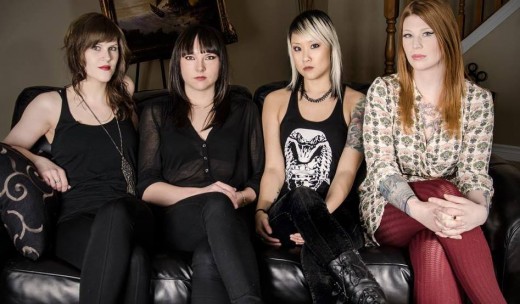 Kittie have never really gotten enough respect, all because some people think they were too cute or “nu metal” when they came out (but now it’s “tough” or ironic to like Baby Metal?). As it turns out, through numerous incarnations the band has written a lot of really heavy stuff and has been around just as long as Arch Enemy, for example. And when Morgan Lander brings the vocal sugar it still sounds way more soulful than saccharine. She can fuckin’ sing. And is a legit bad ass.

The Canadian metal queens still impress live and can hold their own or surpass some of the biggest bands in metal live to this day. This current band might be their most seasoned line up. People might trash on them for their music but then praise shittier bands in the same breath, which is a thin veil for sexism. Like, if they were a gimmick don’t you think they’d have gone away by now? Idiots.

Frankly, if you listen to “Cut Throat” it spanks the shit out of some of the shitty clean vocal autotune 19th stepped on generation death/mall emo bands. I’d still rather see Kittie than almost any deathcore band, and it’s testament to the band’s staying power that people still have favorite or current past members.

A few good Kittie gems that made this Deep Cuts are BELOW.

1. “Forgive and Forget” – do I really need to write about how much In The Black ripped faces? This is heavier than most of the Big 4 currently.

2. “Career Suicide” – again, just listen to the top of this bad bitch. Halfway into the first verse and it’s already killer vibe and heavy feel. Few bands have this much ease with groove, melody and a thrashier edge.