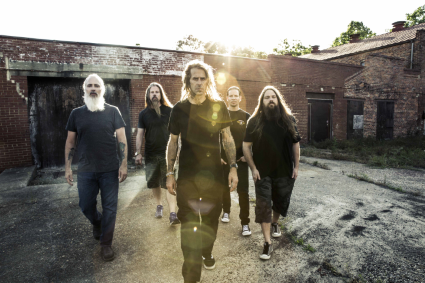 As we celebrate the release of Lamb Of God‘s powerful and compelling new collection of tunes VII: Sturm Und Drang, it seems only fitting that we give a Deep Cuts to a man who has inarguably carried the metal (and punk rock) flag high through thick and thin. Randy is one of the best frontmen with one of the most aggro growls in metal history and some of the most insightful political tracks under his belt as well. The ability of Randy to mix humor, awesomeness, anger and cerebral topics into his lyrics puts him up there with Jello Biafra and the best works of Sepultura when it comes to discussing world struggles. And the way Randy has grown and confronted demons in the public eye has been an amazing thing we all have shared in. Here’s too one of the best ambassadors we have. Let’s rekindle that Presidential campaign, haha.

Vocalist Randy Blythe comments on the release of the new album:“Over twenty years ago this band started in the basement – we’re still standing, and I’m still stoked to be putting out new music. As always, play it LOUD.”

While a new song like “Delusion Pandemic”, a total ripper, could just as well be on this list, here are some older tunes or performances Randy has been a part of over the years that I personally think kicked ass.

See which 3 songs made Deep Cuts this time BELOW.

This tune till gets me more angry at George W. and post 9/11 idiocy and manipulation than any other song save perhaps the Boysetsfire classic “Release The Dogs”. But seriously, this song fucking whiplashes necks and for the band known for perhaps the most pure, unbridled NWOAHM aggression  this one is one of their angriest. I would prob play this first for a “new” listener and if they didn’t like it I’d want to not be friends.

2. Suicide Silence – “You Only Live Once”

Technically this is kind of wasting a Deep Cut as it was a one off concert thing and there are so many others I could choose…but even people who didn’t like Suicide Silence that much dropped jaw at the power of this team up to honor Mitch. Fucking amazing performance and plus…Bad Brains shirt. (So I’m biased, since I like see Dr Know at family gatherings, but yeah). This fucking gives me goosebumps. That crowd roaring back. So awesome.

One, anyone who doesn’t like Today Is The Day is likely a complete loser and this song featuring Steve Austin and early Lamb in full gut kicking glory is an early example of why this band blew so many minds when they hit the scene. I’m thankful we have big metal sites like Metal Sucks and Metal Injection or Decibel and other blogs and mags spreading the word again for metal. For awhile things were bleak but suddenly Lamb Of God got everyone talking when they hit the scene with such zealous intesity. The rest is history. And seriously, how fucking crushing is the end riff of this song?!! AHHHHH!!! The vocal intensity between the two singers on this is gnarly.