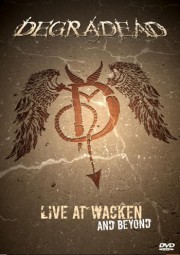 Swedish melodic death metallers, Degradead, have announced a new DVD entitled “Live at Wacken and Beyond” which includes the band’s 2010 performance at Wacken Open Air as well as a documentary and bonus videos. The band has also released music video from this DVD for their song “Human Nature.”

The new DVD will be released February 28th through Metalville Records.