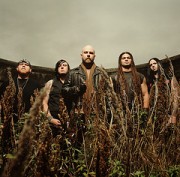 Washington metalcore act, Demon Hunter, have released the track list for their upcoming album, “True Defiance.” This will be the band’s sixth studio album as well as their ten year anniversary. The new album will also be produced by Aaron Sprinkle and mixed by Jason Suecoff. Vocalist Ryan Clark has stated:

“This record is without a doubt our most aggressive. Every Demon Hunter record must be a step up from the last. I know that’s a goal for every band, but it seldom works that way – especially today, especially in metal. It seems like most bands’ prime years are long behind them. I refuse to let that be the case for us.”