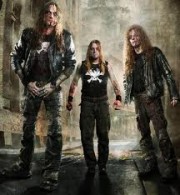 “In addition, there have been visits from Mr. Tom Angelripper, who does the vocals for a new song. Also one of the party: Gerre from Tankard! Mastermind Schmier commented: “For this anniversary album we did a really great job, our new drummer Vaaver opens up new possibilities of course. On this album there are no limits. So fast, brutal and yet groovy we haven’t ever sounded, probably! Also the guest musicians are very special this time: with Gerre (Tankard) and Tom Angelripper (Sodom) our old friends and companions are with us, the original “Mad Butcher/Release from Agony” – line up is doing one song and with Ol Drake (Evile) we got the hottest young thrash guitarist for a few solos on the album! Germany’s best extreme metal producer Andy Classen will take care for the brutal and raw production! The album will destroy even more than DOR: fast riffs, double bass attacks and brutal groovy songs, I think this time we found the 100% right mix! Also the “Mad Butcher” returns to the cover. Cool artworks are very important for us; for the new thrash thunderstorm our artist Gyula created a real hammer again! The artwork makes clear immediately where to go – full force ahead – as it has to be ”