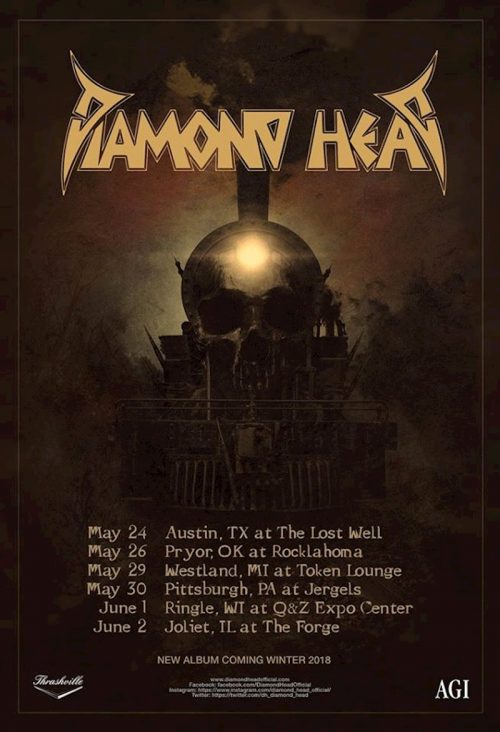 Diamond Head return to North America on Thursday, May 24 for a string of live dates.  The exclusive performances include the band’s return to Rocklahoma where the band are a top billing artist alongside Godsmack, Ghost, Motley Crue’s Vince Neill, and Clutch.

Guitarist Brian Tatler comments: “‘Diamond Head are looking forward to returning to the United States to play at Rocklahoma and five other dates in Texas, Michigan, Pennsylvania, Wisconsin and Illinois.”  Continuing he notes, “we were booked to play at last years Rocklahoma but a storm arrived while we were waiting to set up and the festival decided to cancel all the bands for the rest of the evening. It is in hurricane alley after all, I am hoping this time we have good weather.”

More info and band updates BELOW.

In April 2016 Diamond Head released their self-titled album.  It was their first new recording in almost a decade. Embraced by fans, Diamond Head earned critical acclaim worldwide; it was heralded as a monumental comeback for the 40-year old metal band.

Diamond Head are taking a break from recording their new album to perform the select dates.  They have reported that the mixing process is ongoing with an aim to release the album later this year.

Tickets for Rocklahoma are still available at www.rocklahoma.com