Did Opeth record a song to sync with a movie made by Salvador Dali…and Disney? 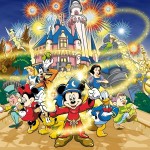 Opeth has recently been accused of being involved in a collaboration with a Disney video that a lot of people have probably seen…oh wait…pretty much no one has seen the video that Salvador Dali made for Disney back in 1944-1945.

It’s pretty obvious that Opeth either planned this or it’s a total coincidence, but not much info is available. Hmmm…

It turns out that Dali was apparently supposed to produce a cartoon for Disney and the Nazis got in the way. (Go figure) None of this really makes sense, but it’s pretty interesting to note that Walt Disney was a Hitler supporter and the film was never officially released until 1993. Yay for World War Two.

So, people are now saying that the Opeth song “I Feel The Dark” lines up perfectly with the video. We leave it up to you to decide. Check it out right here.[youtube]http://www.youtube.com/watch?v=IcPZ69myGec[/youtube]