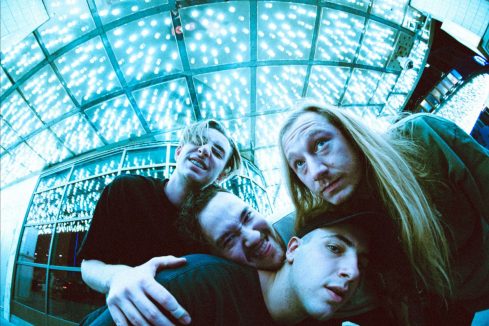 Las Vegas metalcore veterans DISTINGUISHER have released a music video for their emotionally charged new single “We All Suffer” at Metal Injection HERE. A direct follow up to their well received track “Nothing Is Real” – released in March – the song sees the group showcasing their full dynamic range and melodic abilities with Metal Injection commenting “Combining heavy, nu-metal influenced groove, powerful vocals, and chilling melodies, with a solid bit of djent at the end, Distinguisher pulls together all the best elements of metalcore in a fresh way.”

The group elaborated on the thought process behind “We All Suffer” saying, “We All Suffer” directly follows up a track we released 3 weeks ago titled “Nothing Is Real.” The idea of making two songs with accompanying music videos that tie in together was something we’ve talked about doing for a very long time. The goal of this release I think stemmed from wanting to showcase the contrast of the band. We want people to know that we will continue to push the extremes of our sound, whether it’s heavy, more melodic, or even more nu-metal influenced. Both titles were meant to be blunt and painfully inevitable. While “Nothing Is Real” touches on the perception of life and the anxieties that come with it, “We All Suffer” simply states the inevitable in that we will all one day be gone, and that’s something I’ve continued to struggle with the older I get. “We All Suffer” lyrically is filled mainly with questions that I personally feel never get answered in life, and the song’s overwhelming sense of emotion was very much centered around the chorus. I’ll never forget the night Josh and I locked in what would be the main vocal melody, the rest of the song came together so naturally from there. We’re all incredibly proud of the music we continue to make, but we all individually stand by this being our favorite Distinguisher song to date, and we hope you enjoy it as much as we do.”

“We All Suffer” is part of DISTINGUISHER’s 2 track release Nothing Is Real / We All Suffer which sees the group deftly alternating between raw, punishing aggression, soaring choruses, and mosh pit inducing groove while never straying from their highly emotional and fearlessly honest lyrical content. The effort leaves listeners in no doubt that DISITINGUISHER are at the very forefront of metalcore’s new crop of bands that are pushing the genre further than ever before.