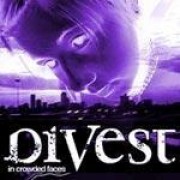 Morgan Y. Evans from Metal Riot here. In addition to being a writer and interviewing bands like Killing Joke, Holy Grail, Sister Sin and Cannibal Corpse, etc. for you folks, I have also been a rock singer almost 20 years.

Big news (for some) today is my old alternative metal/post hardcore band DIVEST has reunited and rereleased a 2001-2002 EP IN CROWDED FACES for you on our new bandcamp HERE. We are going to do a show (date and line up TBA in next few weeks) in our hometown of Kingston, NY in early 2013 and anyone who was in the band over the first run is invited to play a role onstage at that show.

So…Divest is now a collective of sorts. We were first active for seven years and ended up at one point being produced by the awesome team of my favorite guitarist Dr. Know of (legendary) Bad Brains, D.Ilchuk and the Applehead Studio guys (Coheed, The Straylight Run, Brian Goss) in 2003. That record, GHOST TOWN RECKONING was never properly released for complex reasons but is streaming on the great A Thousand Torches sight HERE.

Over the years and several name changes, DIVEST featured members who would go on to or previously played in bands like Dead Unicorn, Coheed and Cambria, Pontius Pilate Sales Pitch, Kayo Dot, Nightmares For A Week/Anadivine and other more obscure acts. We shared the stage with bands like Unearth, Boysetsfire, Bad Brains, Murphy’s Law, Coheed, 3, Codeseven, Bloodlet, Nora and The Hope Conspiracy. It was a crazy ride but ended in a lot of resentments and grudges for some in 2006.

To read the rest of my announcement please click HERE. Thanks!

We have  a number of old releases and special stuff that will appear on the bandcamp in coming weeks to celebrate. Most of it has been mastered by my best friend, DIVEST member and original Shabutie drummer Nate Kelley, including an updated version of a CBGB’s show we did just after 9/11 that was one of the most intense experiences of my life on stage.

The IN CROWDED FACES EP that I put up on Bandcamp today shows us really into bands like Tool, Bad Religion, Hum and Sevendust (a weird combination, I know)! It has a melodic but rough sound and a lot of passion, if not our heaviest record. The band always was a tug of war between cool groove metal, big hooks and a post hardcore influence, so it was all over the place but great catharsis.

We all lived in a house together in White Plains, NY at the time of the IN CROWDED FACES EP and lived and breathed this shit. It is in many ways one of the truest testaments to the band and a good example of why friendship is more important than “the music biz”. It features an early performance of our song “The Hollow Point” with Josh Eppard on drums and Dava She Wolf (of Star & Dagger/Cycle Sluts From Hell) on guest screams, among other highlights. Check it out!

DIVEST now in 2012 is not a full time band. Guitarist Kurt Brown is a paramedic  in South Carolina. Drummer Dave Bodie has kids and is very busy. Mike McCoy, one DIVEST bassist, is trying out to be the new Elmo. Sean Paul Pillsworth is very busy with Nightmares For A Week, one of the best punk bands in the USA! Nate Kelley lives in PA with his rad wife and works a lot, but we are gonna have fun. Do shows when we can and on special occasions. Track some new songs once in awhile (plan is a brand new EP next spring, hopefully). Keep it alive and PMA, as Doc would say.

Some of the original members may not be participating in the reunion, but it has a ton of past mebers who are. We also have a new member, Chris Heitzman. He is in my current full time project, indie rock/electro band Black & White Universe and is a sometime guitar tech for Coldplay and Mercury Rev (for reals). Chris has rekindled my belief in a healthy and super productive musical relationship and will bring so much to whatever we do in DIVEST in the future.

Here’s to next year!