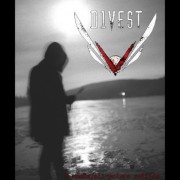 Hey Metal Rioteers. Hope you all got your holiday shopping done and were able to grab a hard to find Turbo Man Doll from your local retail chain without too much trouble. I wanted to announce another rerelease from my recently reunited band DIVEST as a free download for anyone into it.

This EP “5 Weeks/All Points Collide” was the last recordings we made before the band broke up in 2005. It features the line-up of Sean-Paul Pillsworth (Anadivine/Nightmares For A Week), Nate Kelley (Shabutie/Coheed and Cambria’s 1st album), Joe Maggio, Dave Parker (Weerd Science, Stellar Young) and myself. The EP was recorded at Darkworld Studio (3, Painmask) in Kingston, NY and features more of a post-hardcore direction than earlier alternative metal releases. We were rockin’ a lot of early Thrice and Cave In at the time.

This is the 4th recent rerelease from us, including our self-released “In Crowded Faces” and “Taste Of Seven” EP’s from the early 00’s as well as our 2003 full length album “Ghost Town Reckoning” (co-produced by Dr. Know of Bad Brains, D.Ilchuck and Applehead Studios)

Check out “5 Weeks…” and download it for free HERE.