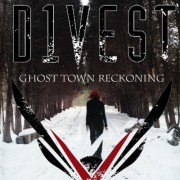 Hey rocker people. I am tired from going to see The Chariot/ETID tour last night and witnessing a lot of awesomeness. Just wanted to tell you all that my old (recently reunited) band DIVEST has put up our 2003 GHOST TOWN RECKONING album for download HERE. In the coming weeks we are going to be releasing old material online and gearing up for a show announcement for next year.

DIVEST were first a band from 1999-2006 and GHOST TOWN was to be our first proper debut. It was produced in Woodstock, NY circa 2003 by Mike Birnbaum and Chris Bittner at Applehead Studios (Coheed and Cambria, Codeseven) along with Dr. Know of the Bad Brains and D. Ilchuck (Leeway). The record was supposed to be on Dr. Know’s planned FKM Records imprint but never came out (Just a 2 song 7″). It has never really been available for various reasons before except as an online stream. The record was mastered in 2009 by Nate Kelley.

This is about friends reuniting to make it count and for fun. About adapting to our lives now and talking about what we believed in (not careerism). Spent so much time recently just laughing about good memories. Fuck the haters.

Go check it out. I added track notes and stories to each song. This album was about facing your demons and staying strong.There are also guest appearances on the album from Sean Paul Pillsworth (Anadivine/Nightmares For A Week) and Dava She Wolf (Star & Dagger).