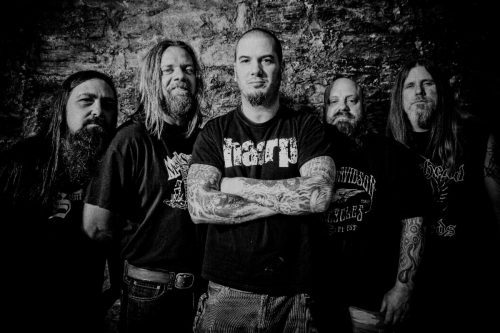 This year marks the twenty-fifth anniversary of DOWN‘s 1995-released, now classic debut, NOLA. Plans for select shows featuring vocalist Philip Anselmo, guitarists Pepper Keenan and Kirk Windstein, drummer Jimmy Bower, and bassist Pat Bruders performing the record in its entirety were sidelined due to the global pandemic. In its wake, the band is pleased to announce an exclusive livestream later this month!

Comments the band, “DOWN was a simple band started by friends with a love of heavy music and the songs on the NOLA album were magic from the first rehearsal. We’re extremely grateful to be celebrating the NOLA record with a live stream that the world can see. Watch the show and plug in through your loudest stereo! We love y’all!” 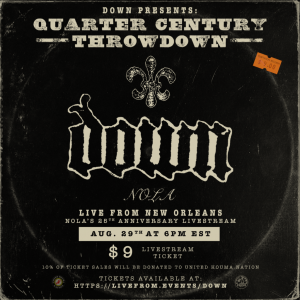 Livestream tickets and packages are available at THIS LOCATION with additional merch designs available HERE.

10% of ticket sales will be donated to the United Houma Nation (UHN), a state-recognized tribe of approximately 17,000 members residing within a six-parish (county) service area encompassing 4,570 square miles. The six parishes — Terrebonne, Lafourche, Jefferson, St. Mary, St. Bernard, and Plaquemines — are located along the Southeastern coast of Louisiana. Within this area, distinct tribal communities are situated among the interwoven bayous and canals where Houmas traditionally earned a living. Although by land and road these communities are distant, they were historically very close by water. However, boat travel is no longer a viable option due to the effects of coastal erosion, which has left these waterways either nonexistent or impassable and, in many cases, completely open water that requires larger vessels for safe travel. The tribe today is presented with the unique challenges of preserving and maintaining its culture and way of life when the land is disappearing. The United Houma Nation is committed and dedicated to doing exactly that.

In addition, 10% of proceeds raised from a special, limited DOWN/United Houma Nation t-shirt will also be donated to the UHN. For preorders, go to THIS LOCATION.