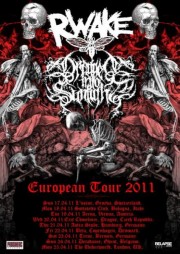 UK dark metallers, and Prosthetic Records first UK signing, Dragged Into Sunlight have announced a European tour with Rwake. The trip runs April 17th through the 25th and includes dates with Weedeater, Today Is the Day, and Soilent Green. In the meantime, the band who appear masked in photos, play in near total darkness and smoke and do not publicize their individual names, will be supporting Mayhem this weekend in London. The track, “Boiled Angel,” from their debut, “Hatred For Mankind,” which will see its North American debut via Prosthetic on January 18th, is now streaming at Brooklyn Vegan.  To check it out click here.

More News On Dragged Into Sunlight: