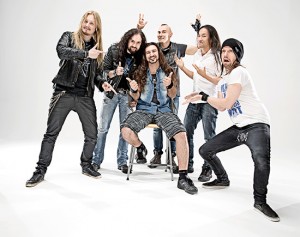 DragonForce have announced former Braindamage and Kill Ritual drummer Gee Anzalone has joined the band. A native of Turin, Italy, Gee is a drum teacher who graduated from the NAMM Academy of Milan and carries on the well established multi-national mix of musicians that make up DragonForce.

Dave is moving on to pastures new to focus on his first musical love which is Prog Rock and has released the following statement:

“After much thought I have parted ways with the boys in DragonForce to pursue my first love of progressive rock, I wish the lads all the luck in the world and look forward to the release of Maximum Overload as I truly believe this is the most fantastic DF album that I and the boys have recorded to date!Many thanks to all the fans who have supported me in this last decade of massive tours, countless shows and all the albums, I couldn’t have done it without you. I will continue to tour and play with some of the greatest names in Prog Rock, and hope to see some familiar faces on the road! In the meantime, stay metal, watch out for the new Dave Mackintosh website which will be launched within the next 4 weeks as well as some great new videos I will be producing with my gear sponsors DF forever!!”