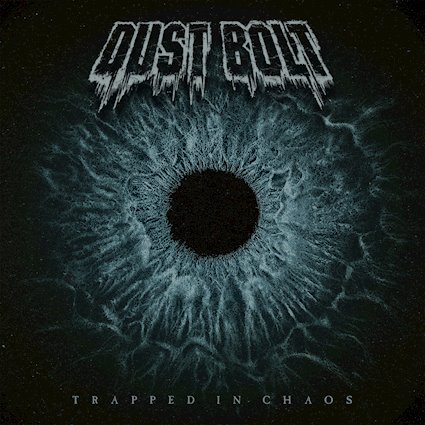 German thrashers Dust Bolt are preparing to return with their fourth full-length album Trapped In Chaos on January 18 via Napalm Records. Trapped In Chaos is the follow-up to 2016’s Mass Confusion.

The band bring together an enjoyable mixture of a wide range of thrash variances. While you won’t find any Venom-esque darker, heavier types of thrash on this offering, for example, you also won’t find Dust Bolt playing the same blistering guitar for speeds sake for eleven tracks straight.

Check out my full review of Trapped In Chaos here.

Trapped In Chaos opens energetically with “The Fourth,” which displays Dust Bolt’s chops on gargantuan NWOBHM-esque choruses built into their chugging thrash.

“Dead Inside,” for which there is a music video, has an almost minute-long instrumental introduction, that leaves me pounding along as I wait desperately for the first lyric. The fourth track, “Bloody Rain,” is the second longest track on the album, clocking in at five minutes and fifteen seconds. This song is the first on the album where vocalist Lenny Bruce breaks out the growl. Bruce’s growls are good – they don’t come off as a gimmick, but are a natural part of the progression of the album. Growls give way to an instrumental that slowly starts to fade away, before “Rhythm To My Madness” revs up.

“Shed My Skin” is an energetic track that features growls and, briefly at the beginning, gang vocals. “Shed My Skin” packs everything that Dust Bolt does well all up into one song, in an energetic four minutes that don’t feel overfull or clumsily executed. It’s a headbanger from start to finish. “Killing Time,” similarly, packs a lot into just over two minutes. If you’re short on time but want a taste of Dust Bolt’s flavor, “Killing Time” is as good a place to start as any.

After “Killing Time” is the title track, a pulsating track, that near the three minute mark erupts into a shredding guitar solo that speeds the song up and allows for Bruce to let out a thrashy shriek. Still, the greatest tonal shift of the album comes in the form of the over six minute long track, “Another Day In Hell.” A slow, sorrowful track, it’s reminiscence of the movement of the more melodic thrash of, say “One” era Metallica, building to louder, more cacophonous parts, speeding up and slowing down again, the song is a refreshing thrash ballad. “Another Day In Hell” is easily my favorite track on the album.