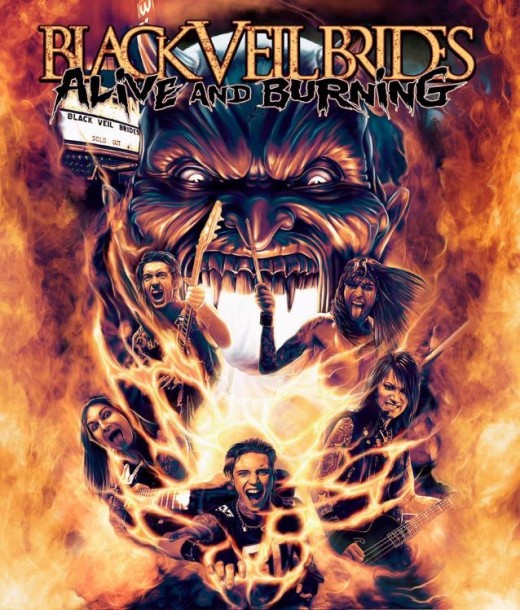 Alive and Burning is everything a Black Veil fan could want in a DVD
experience. Great audio, an extensive booklet and pro footage of BVB ripping
through a lengthy set in November of 2014 at Los Angeles’ Wiltern Theatre. The
band have come a long way since vocalist Andy Biersack used to sleep in his
car. Right from the opener “Heart Of Fire”, you know why Avenged Sevenfold
need to watch their backs. This band right now could blow them off the stage,
and I’m not even an Avenged hater.

The hard working, hard rock tradition loving band that people either love or
hate threaten snobs who just don’t get where these dudes are coming from or
like the aesthetic, but in reality Black Veil are right up there with some of
the best 80’s bands. They are certainly light years better than a plethora of
compressed emo vocal bands all trying to grasp at pubescence with high pitched
vocals while also trying to sound tough and screamo-core or the distended anus
of most deathcore mouth fart vocals and floppy breakdowns these days.

Watching this DVD is exciting, fans are stoked, rock n roll is alive, the band
have sick gear and Andy is using his real, God given voice to kick ass. The
band have on stage fortitude and a killer energy exhange with fans many
numbskulls could learn from if they could stop automatically associating glam
or death rock with Mall metal trends. Personally I love when I see some
younger kid with a Heartogram or a Black Veil T Shirt, because it isn’t fake
music.

Not trashing electronic or pop or whatever, just sayin’…it’s nice to know
some people still care about the still cooler old fashioned heavy fucking
metal guitar and a golden, brooding lyric or burgundy rich bloody chorus
melody. Jake and Jinxx are two of the nastiest in the business these days. My
guitarist in my rock band GET OUT. and I geek out about their playing in the
same conversation as the dudes from Unearth, who can fuckin’ play behind their
heads. I’d rather see Black Veil than fuckin’ Megadeth even with Lamb Of God’s
drummer, just cuz Dave Mustaine is cuckoo these days with the more
Conservative side of the Jesus juice, from all accounts. But also cuz “I Am
Bulletproof” is pretty darn exciting in a live setting, fast and precise.

Here’s hoping some younger, more naive BVB fans will grow to love stuff like The Cult, Slaughter, Sister Sin, Diablo Blvd, Bulletboys. Danzig or the crazy band (just plain, no Sin attached save their own sins onstage and off) Sister as well. The 69 Eyes.

Bands who can also really do the hard rock thing justice.

From bonus material meeting fans to “Coffin” played live in L.A. for the first
time (with a great drum attack from ferocious animal Christian “CC” Coma,
people singing their brains out and much more…this is highly recommended.
It’s up there with the recent Anthrax in Chile DVD in terms of the band being
superbly and matter of factly at home in their element on stage, and that was
performed by ancient thrash legends! BVB have def graduated to the next era,
level of their much more than promising outfit.