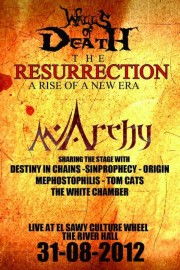 So apparently Ismail El-Weshahy, a lawyer for the Muslim Brotherhood’s Freedom and Justice Party, has filed a complaint with Egypt’s Interior Ministry against the cultural center El-Sawy Culture Wheel because they hosted a heavy metal show on August 31 where, “satanist rituals were held.”  Huhuh…cool. So what, were they like sacrificing goats and stuff? Oh no. Way worse, they were wearing black t-shirts and dancing!!!  Whoa, seems like nothing right?  Wrong, the club at least should probably be a bit worried.  Egypt has a bit of a history of hating metalheads.  They jailed about 100 of them, some for weeks, 15 years ago claiming they belonged to some kind of satanic sex and drug cult. (this has me thinking of starting one so if anyone wants in let me know)

The center has denied any satanic activity and claims the only violations they had were things like people smoking, and that they dealt with it.  Egyptian metal musician Wael Osama commented to Ahram Online on El-Weshahy’s allegations:

“El-Weshahy made grave legal accusations against the metal bands. We should be concerned about the reactions of the public. After all, we recently saw what happened to the young man who was walking with his fiancé in Suez and was killed by radical Islamists.  I tried to use the media available to me to explain the metal subculture to the people of Egypt.  I feel sympathy for this lawyer, since he may not be familiar with the metal subculture, and therefore may find it strange to see young people headbanging and wearing black.”