Electric Wizard and Spinefarm inform us it’s “Time To Die” on Sep. 30th 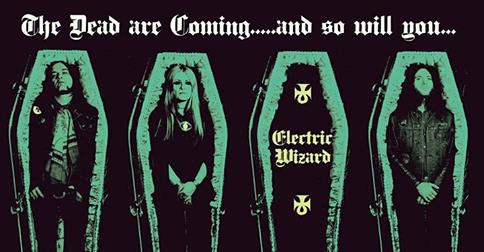 Electric Wizard have revealed that their forthcoming studio album, Time To Die, will be released on Sept. 30 via Spinefarm Records; Time To Die is the eighth full-length offering from the masters of aural punishment, and is testament to the fact that Electric Wizard continue to be the most uncompromisingly heavy, genuinely twisted and evil band in the world.

This will be their first album release since signing a worldwide deal with Spinefarm Records.

In addition to this, a brand new video clip for “I am Nothing” has been unleashed via www.ElectricFuckinWizard.com.

EW guitarist/vocalist Jus Oborn has said if the track, which harnesses the dark underground death metal spirit of 1984:

“It was the year I became a metal-head.  It was heavy shit for real – there was no way you were ever going to get a decent job. So I became a Satanist, I dug up a grave, I got into tape-trading, I had a one-man noise/black/death metal band called Regurgitated Guts, and there were loads of documentaries on TV warning us not to listen to the devil’s music…”