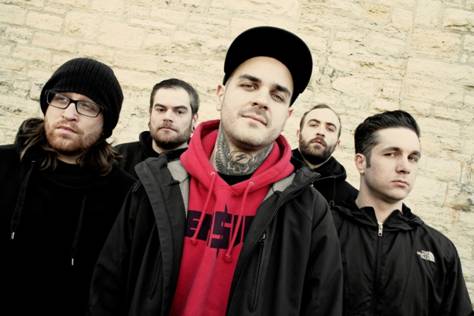 NYC’s Emmure, the most divisive heavy band in pretty much years, have released a new video that many will love to hate, entitled “E”. The video is pretty fun. The track come from their 6th record Eternal Enemies or, as detractors are calling it, Eternal Enemas. Personally, sure…they do ridiculous and often tasteless shit sometimes, but there have been many worse bands and Emmure do put on a solid live show that is really not comparable to getting liquid injected in your anus to unclog the works. Also, Victory Records and Emmure were super cool when I thre a benefit concert in my town for homeless kids and sent me a ton of raffle merch that really helped the cause, and that was pretty darn cool of them.

Anyway, get your damn bounce/mosh on to “E” HERE. If you don’t like ’em, there are so fucking many other bands to listen to.

[youtube]http://youtu.be/f5EdZbRan8k[/youtube]
EMMURE is now on tour in support of Eternal Enemies, heading to Europe before their headlining run on the Victory Records Stage all summer at the 2014 Rockstar Energy Drink Mayhem Festival. View all tour dates.